“Sawabona, Yaba Sawabona”
I See You, We See You Too

“Yes” — after listening to Sr. Lynn Levo’s (Carondelet-Albany) presentation, “Radical Unioning Love: Words Are Not Enough”, this was the response in my heart, “Yes”. How did I arrive at such a simple, yet, powerful response which embodies my experience and being called into “the MORE”?

Upon arriving in St. Louis on Thursday, I had decided to take the Metro from the airport to the hotel. As I navigated finding the Metro and approached the kiosk to buy a ticket, a young man asked for money. I was stuck in the details of my travels, and so the young man walked past me, heading towards the train platform.

As I boarded the train, I saw the young man was on the train. He approached me, and, explained that earlier he was trying to ask me for money so he could buy food. Another man, sitting nearby, overheard our conversation, and said, “I have food.” This man opened a very large blue bag containing what appeared to be all his possessions. He reached in and took out food to share.

Taking the train stretched me. I was traveling alone. I was unsure of the details and I certainly would have preferred to have stayed insulated in the comfort of a taxi or an Uber. I arrived at the hotel and was warmly greeted by friends, my travel experience still churning in my thoughts.

Before Sr. Lynn’s talk, during the opening ritual, there was a strong sense of peaceful, unifying love permeating the room. The opening ritual created a loving, safe space for all, where we could share. My heart was open.

As I listened to Sr. Lynn’s talk, I recalled my experience on the train, I knew those moments in time were given to us, myself and the two young men, to participate in each other’s lives. Those moments were a gift.

As Sr. Lynn concluded her talk and invited us to reflect on what she had shared, my heart said “yes”, and I thought of how Mary had said yes. She said yes to a call, a call that was radical, that was extremely difficult, filled with love and suffering.

[Toni Fredette is an agrégée candidate and director of communications for the Sisters of St. Joseph of Lyon in Maine] 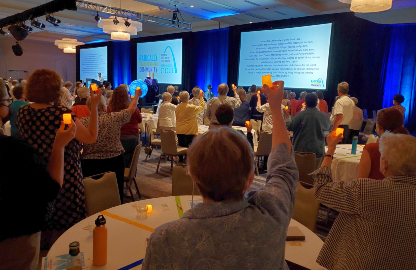