As part of our Season of Creation celebration (from September 1- October 4 annually), the U.S. Federation of the Sisters of St. Joseph welcomed social and environmental entrepreneur Dea Wehrli to speak to the U.S. and global network. Wehrli spoke on the theme of single-use plastics, a familiar theme for Wehrli as she helped the United Nations craft their Single-Use Plastics: A Roadmap to Sustainability Report. This problem continues to impact the U.S. and world at a monumental scale. The volume of single use plastics dumped in landfills and the environment has reached new levels, with enough plastic bags thrown away every hour to be wrapped across the world seven times, according to Wehrli.

Even with the popularization of practices like recycling, Wehrli reports that near 80% of single use plastics are still sent to landfills or are not properly disposed of, 12% are incinerated, and a mere 9% are actually recycled. Oceans, forests, and the air have become flooded with plastic build up and the toxic chemicals that are produced by their eventual breakdown. Wehrli explained that plastic is a material that can take thousands of years to break down. And while plastics break down and become smaller, it becomes more likely that an animal mistakenly eats the plastic. "Birds have been found starved to death although their bellies are full of plastic,” Wehrli said, “which then works its way back to us through the food chain."

The solution? According to Wehrli, we should make our goal not to recycle waste, but to stop the creation of waste before it ever begins. People should aim to reuse, borrow, and repurpose things we already have in our possession rather than buying things we do not need or cannot use more than once. “If there is no way at all, then landfill should be an option. But definitely dumping into the environment should not be an option.”

These measures alone will not alone provide the radical change necessary to address our climate crisis. As a last step Wehrli recommends policy change, though she warns about push back from the industry. “There is a huge industry behind the plastic bag that protects it, that live from it … you can't just ignore [the single use plastic industry],” said Wehrli. “You need to work together, you need to take them into account and think ‘okay how can this be changed, what are the sustainable options that can they transform into?’”

For proactive climate measures to be really carried out, Wehrli emphasizes that we must account for consumer and community behavior to push for private sector change and public sector reform. Climate saving policies could look like: total or partial bans of certain products like the Rwandan plastic bag ban; economic instruments such as a levy on the use of plastic bags; incentives such as tax breaks for those who use more sustainable energy; or a combination thereof.

However, not all policies are created equal. If policies are not formed with the consumer and community in mind, Wehrli explained that many environmental policies fail to be effective. For Wehrli, the example of Bangladesh comes to mind. In 1989 massive flooding was attributed to the amount of plastic bags clogging waterways. In the early 2000’s it was estimated that as many as 9 million bags were used a day in their capitol city alone. As a result, the government banned the use of plastic bags in Bangladesh receiving an initial positive response from the public. Yet due to a lack of cheap alternatives and enforcement from the government, this fell out of practice. While many environmental legislation measures are still in their infancy, accessibility and enforcement prove to be mainstay barriers globally.

On moving past these barriers, Wehrli is mindful that transition is, “a long term process and you need to think carefully on the consequences it has,” that needs to be fueled by “increasing consumer awareness and improving waste management systems” to be effective in reducing plastic waste.

For Wehrli, this is more than just a theory. She successfully implemented these measures in her own community by helping found Chez Mamie, which provides accessible low waste goods in her own community. Presently, she is working on a new project called E[co]work, which aims to provide a workspace for those working with discarded electronics, or e-waste, in India. Helping sustain a community-based business model that functions to support sustainable societies, improve the overall health in the area, and promote responsible production and consumption.

If you missed Dea Wehrli’s original presentation, you can view her taped presentation on YouTube and view her slides here. 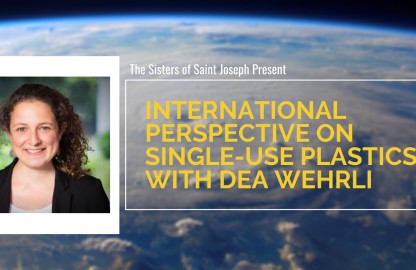