Currents of Hope and Grace in the Canadian Federation

Currents of Hope and Grace in the Canadian Federation

For four days, Sr. Joan Gallagher, Leadership Council co-chair and I attended the Canadian Federation Board Meeting — the Canadian version of the U.S. Federation Leadership Assembly.  A year ago at their meeting, an idea emerged to use social media for the purpose of furthering unity among the Federation. A four-part series is the result. We got to see the first interview titled, "Bearing the Beams." It consists of our Canadian sisters engaging in discussion with Krista Tippett, the host of the public radio program "On Being." It is now available through this link. Three other YouTube videos will be available throughout the next several months including a dialogue entitled "the Formation Project," "Nuns and Nones," and "Collective Wisdom." Links to these will be in the Members-Only Section of the U.S. Federation website.

Online presence was a real theme of this year’s meeting. The Canadian Federation is trying to raise the visibility of their sisters’ work. They plan to produce short, snappy vignettes illustrating the ministries and relationships that sisters have. These vignettes will build visibility and raise up awareness of the sisters’ availability to help people search for meaning in their life. They are trying to be the visible joy to which Pope Francis calls them.

The Board viewed a 9-minute video that describes the Village Earth Spirituality Program and Practicum, a program offered for St. Michael’s College held at Villa St. Joseph Ecology and Retreat Center in Canada by Sisters Mary Rowell and Mary Mettler. A similar eco-theology and the Sisters of St. Joseph spirituality program based on Laudato Si’ has been offered to the last two Federation novice classes and will be offered again to this year’s novitiate at Villa St. Joseph.

Fr. Frank Morrissey, a canon lawyer, was scheduled to present but was unable to attend. He sent his presentation specifically focused on ministerial public juridic persons and options for future configurations of religious life. We worked through it. It was a fascinating discussion about what the next period of time offers to religious communities. The Federation Board may form a group to study what the Federation might need for the future to further the spread of the charism.

[Sr. Patty Johnson is executive director of the U.S. Federation of the Sisters of St. Joseph] 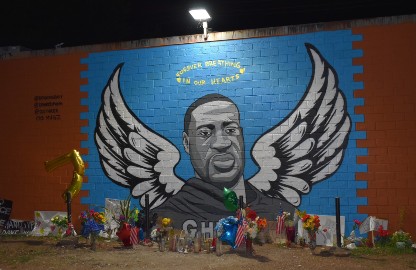 The U.S. Federation Responds to the Verdict in the Derek Chauvin Case