On October 10, 2019  Catholic Mobilizing Network celebrated ten years of advocacy to abolish the death penalty in the United States. The event, which took place on the World Day Against the Death Penalty at the Vatican embassy in Washington D.C., was filled with supporters to honor both the success of the organization and the key figures who have helped shape and lead this movement in the Catholic Church.

The night honored the work of Catholic Mobilizing Network, which is a sponsored ministry of the Congregation of St. Joseph that not only advocates to end the death penalty but also promotes restorative justice through small group trainings and resources.

The event honored many members of the U.S. Federation of the Sisters of St. Joseph family throughout. Karen Clifton, the founder and previous executive director of Catholic Mobilizing Network, received the Founders Award at the event. Clifton was presented the award by Sr. Janet Fleischhacker — a sister from the Congregation of St. Joseph and executive director of CSJ ministries — and Mary Novak — Congregation of St. Joseph associate and chair of the Catholic Mobilizing Network board of directors. After receiving her award Clifton spoke about how far the anti-death penalty movement has come since she first started her work, a common thread throughout the speeches and presentations. Clifton said she owed beginnings in this line of work because of her fellow awardee, Sr. Helen Prejean from the Congregation of St. Joseph.

Sr. Helen Prejean was honored with a lifetime achievement award from the organization. After being presented with the award, Sr. Helen addressed the crowd by reading from her newest book “River of Fire: My Spiritual Journey.” From this excerpt, she discusses the first execution she ever witnessed and how no religious leaders protested the execution. Comparing that to today, Sr. Helen remarked how far we’ve come especially in regards to attitudes within the Catholic Church, including Pope Francis’ revision of the Catechism in 2018 declaring the death penalty inadmissible.

Concluding the evening, Krisanne Vaillancourt Murphy, executive director of the Catholic Mobilizing Network and Spirits on Fire attendee, spoke to the crowd of the continued importance of prayer and action.

In addition to the CSSJ family, Catholic Mobilizing Network honored the work of Archbishop Joseph A. Fiorenza with the Dignity and Life Award.

Catholic Mobilizing Network’s work continues. On November 20, Texas plans to execute Rodney Reed, who the state has refused to allow additional DNA testing despite continuously maintaining his innocence. To learn more about his case and to send a letter to the Texas Board of Pardons and Parole, please visit this website. 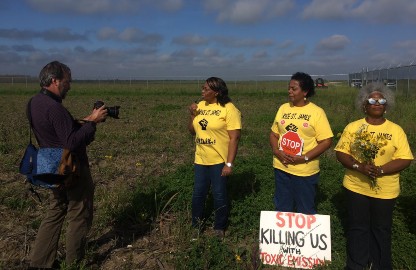