On Thursday, July 18, members of the Catholic community joined together in front of the U.S. Capitol for the Catholic Day of Action for Immigrant Children. The Federation, along with 100 other Catholic organizations, endorsed the event and pledged our moral, physical and spiritual support. A group from the CSSJ family attended the initial event to represent the Sisters of St. Joseph's Charism of unifying love and service to our "dear neighbor," with some of our sisters participating in an act of nonviolent civil disobedience. You can view a video of the arrests here and read a reflection from one of the sisters who participated, Sr. Susan Wilcox (Brentwood). Sr. Carol Zinn (Philadelphia), executive director of the Leadership Conference of Women Religious (LCWR) led us in this reflection.

The July Day of Action was just the beginning. As we move forward, the Catholic Coalition has planned a strategic campaign with the goal: to increase the visibility of Catholics willing to take more risks to stop the inhuman treatment of migrant children and to end child detention. The first phase was the prayerful direct action in Washington DC, July 18th. The second phase is a direct action which will be in Newark, NJ on Sept. 4th. The third phase is a direct action at the border in early October. There will likely be coordinated weekly actions between these three events.

Hundreds of people are already signed up to participate in further actions; ign-up for campaign updates here.

Please read our press release on the Sept. 4 Catholic Day of Action here.

Catholic organizations are again coordinating a nonviolent campaign to end the abuse of immigrant children and their families by the U.S. government. After the successful mobilization in Washington, D.C. last month, national organizations are partnering with local groups from NY and NJ as well as Cardinal Tobin in phase two: a national prayerful direct action which will take place in Newark, NJ on Wednesday, September 4. The event will include prayer, ritual, and a call to action by Catholic leaders. Because of the urgency and depth of the injustice, there will also be an opportunity, for those who choose, to engage in nonviolent civil disobedience.

If you can not join us in Newark but would like to participate in your own community, please read on for resources.

Recognizing our power in numbers, we are encouraging all of our congregations to consider actions they can take in their own community in solidarity with those who are attending the Sept. 4 event. Below is a list of resources to help plan prayer services, public witnesses, and to prayerfully consider accompanying our immigrant brother and sisters to their ICE meetings.

Congregations have turned to weekly Public Witnesses, both done individually and joined with interfaith networks. Maria Elena Perales, justice director for the Sisters of St. Joseph of Orange, encourages those considering public witnesses to invite other groups of sisters and other people of faith to these events. She also encourages contacting local media and inviting them to attend the events to draw even more attention to the cause. Their events typically last an hour, and they distribute signs, assign folks to lead the prayers, use a bullhorn to welcome folks, give a brief overview/update on what is going on then start with the prayer, followed by instructions about where people should walk/stand. They then start the chant they sing while walking to the designated location. At the end, they close with a prayer. Perales notes that setting up chairs for elderly sisters is a great way to get the entire community involved.

Below is a sample poster that the Sisters of St. Joseph of Orange use for their public witnesses.

One tangible way people can get involved is by accompanying individuals during their check-ins with ICE. Accompaniment programs can make a real difference and has led to stopping deportations, reducing bond fees, and keep families together. We've included some organizations that organize accompaniment programs. Consider contacting your local immigration coalition to see if they offer similar programs.

We continue to urge everyone to get involved by calling the White House to say NO to President Trump’s inhumane policies that separate families and harm children. Call the White House phone number (202) 456-1111 and use this sample script:

"As a person of faith, I am calling today to strongly oppose the Trump Administration’s efforts to hold children in dangerous detention centers, and separate immigrant families at the border and in communities around the country. Family is sacred—it is the cornerstone of our church and our community and must be protected. The Administration’s policies have led to the tragic deaths of seven children and are traumatizing a whole generation of children.

Guided by our Catholic Social Justice values, we affirm the dignity of all people and our call to love our neighbors. Every family deserves stability and security. Families seeking asylum at the border should not be separated, and children in the United States should not live in fear of their parents being taken away from them at any moment.

We call on the Trump Administration to immediately end the unjust and immoral practice of jailing children and separating families."

Sisters of St. Joseph and their partners across the Federation are actively working on migration. Using the knowledge and experience of those working on the margins, we use our collective voice through the Federation to speak on immigration issues. Learn more about the Sisters of St. Joseph and the collective statements we have made on behalf of our immigrant brothers and sisters throughout the years: 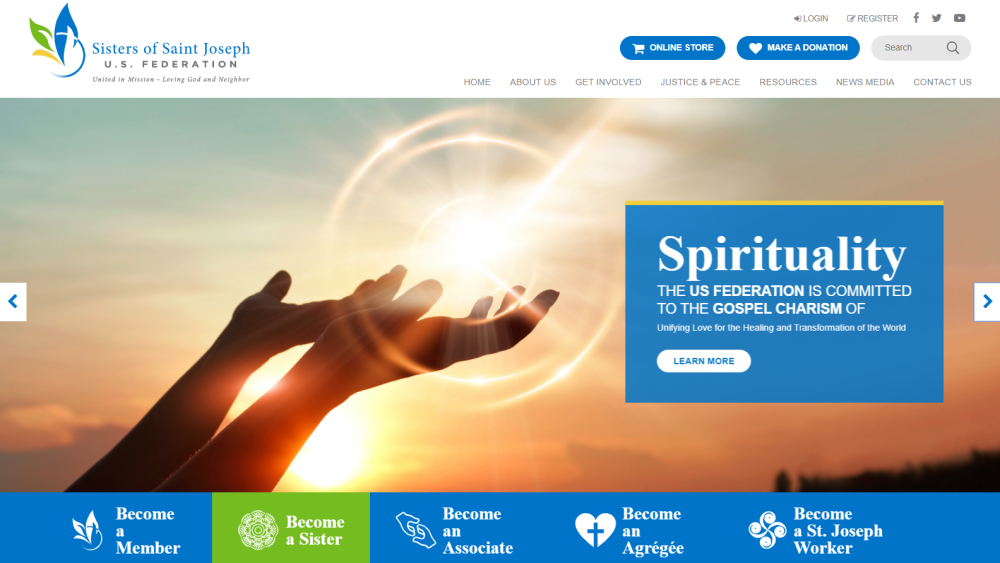