In August 2019, the U.S. Federation of the Sisters of St. Joseph released a statement recommitting to create communion at the intersection of racism, migration, and climate crisis. Our mission of unifying love and healing calls us to examine how these issues compound to affect our most vulnerable communities. As part of this commitment, the U.S. Federation is working with Sharon Lavigne, the leader of Rise St. James, a group fighting against the construction of the Formosa Plastics Complex in St. James Parish, Louisiana. Additionally, Sharon will be our featured speaker for our Earth Day 2021 programming.

Sharon is a high school teacher and lifelong resident of St. James Parish – a largely Black community along the Mississippi River. As a child in the 1960’s, she remembers when the first chemical complex came to her area promising jobs and opportunity. More and more plants arrived, again all promising jobs and money. Now in 2021, St. James Parish has over 12 chemical plants and has a poverty rate of 16.6% — higher than the national average. As a whole, Cancer Alley is leading the country with some of the highest rates of cancer and COVID-19. The conditions in St. James have become so dire, many are leaving their home. When Sharon discussed this with her family, she decided that leaving was not an option. “We have such beautiful land, if we move the chemical plant, they’ll bulldoze our homes down like we are nothing,” Sharon said, “I'm not going to let them do that.”

We talked to Sharon about how these chemical plants are affecting her community and what they are doing to fight back.

This interview has been edited and condensed.

Morris: Can you tell me a little bit about St. James Parish?

Lavigne: My community is a small community, there are a lot of African American people living here. My community was full of people, but now it’s like a skeleton. When I was young, we had clean air and clean water. Our land was so productive we grew our own gardens. We worked in the gardens. We had pecan trees; we always had blackberries. Every summer, we had blackberries. Now, we don't have that anymore. Our pecan trees are gimpy, they might bear every other year. I have one tree that bears, but it's hollow. There's nothing inside and the meat is not in there. My persimmon tree is just about shot. We don't even grow corn anymore because it's not productive. We don't see the blackberry vines along the bank. You don't see any more behind the levee like we used to when I was a little girl.

The air is so polluted. If you go outside certain times of the day, you can't stay out there. If you come to St. James [Parish], stay here for about two hours at a certain time of the day, you might leave with a headache or with a stomachache. That's how bad it is.

The children play outside, but they can't play out there for a long period of time, they might come back in the house scratching and itching. I see birds, but I don't see as many as I used to see. I don’t see robins like I used to see. Like we used to see all these grasshoppers, they’re all gone.

It's not like it used to be, but this is our home. I think the chemical plants shouldn't bombard our community. We already have twelve in the Fifth District. They're trying to get another industry to come in here, which is Formosa Plastics. If Formosa Plastics comes here, it will be fourteen [new chemical plants from Formosa] plus the twelve [existing plants] …The [public officials] seem to think it’s just going to affect the Fifth District. It's not — it’s going to affect the whole Parish.

What did it look like in the beginning when these plants started coming in?

Back in the late ’60s — I think I was in eighth or ninth grade — the first plant came in and we thought it was nice. My dad and everybody thought it was nice. It was a good thing for jobs, but they didn't know back then about the pollution. And I guess more and more came after that. If it would have been just that one maybe it wouldn't have been so bad but more came after. The Parish officials welcome all of [the plants] that want to come in, they just let them come in. You know we didn't even know that our public officials were voting for these things to come in — well, I didn’t know anyway.

What do the other industries look like in your neighborhood?

One is an ethanol plant. One [of the other plants] might have one or two ethanol plants that are just about almost finished. [The plant that is almost finished] bought our high school right under our nose. The public officials knew, our school board members knew, but we didn't know until after it was done. They called a public meeting to let us know. That was so hurtful.

Some of the conversations surrounding the Formosa complex are framing this as a conflict between economic opportunity and environmental well-being. What do you say to that? Do you think it has to be a choice?

The plant was also built on a former slave burial ground.

Yes, when Formosa bought the property, they knew about the burial grounds, but they refused to bring it to the attention of our Parish officials who gave them the permit to build…We went and did the research. The owner's name was William Winchester. I think he had around 200 slaves.

We found out that there is more than one grave site on the property. A federal judge in D.C. made [Formosa] halt the construction. Then a judge in New Orleans made them help us. I think that makes a difference because we feel like our ancestors are buried there and they don't consider the dead. They did not care. They were not going to let us know about it until we brought it out to the light.

Do you think that the gravesite could stop Formosa?

I'm praying — hoping it does.

If it doesn't stop the build, what will happen to the bodies?

[Formosa is] talking about putting a fence around it. Make sense?

So, there will be a fence around a gravesite in the middle of a chemical plant?

Yes. It might be more than one grave like in the middle of a chemical plant. [There is] another grave site across the river from where I live. The [plant] built a fence around it. You have to go to the plant manager so you can go visit the grave. I don't want to have to go and ask, I just want to go and visit. When I went to put flowers on the grave [at the Formosa building site] they stopped me. I had a bouquet of red roses, and they stopped me. They called the police on me when I was out there, so I had to leave.

What did the beginning of Rise St. James look like?

I was so encouraged when we had our first meeting in my den in October 2018. We were hopeful, wound-up, and everything. Then when I had the first march for Rise St. James on November 3, 2018, I was so hopeful. My daughter was crying, and she said “John Bell Edwards [Governor of Louisiana], it’s timeout! It’s timeout! My three-year-old daughter shouldn't have to tell me mommy my nose doesn't work.”

In just three short years you have been able to accomplish so much with Rise St. James. What would you say to someone who wants to do something similar?

I’d tell them to see God and then just do it. Don't listen to people with negative thoughts; stay away from those types of people because you will never get it going… Just go out and do it. Don’t just sit around and talk about it and say, well, ‘I don't know how to do that.’ Don't think like that! Think positive. Think about saving your lives. When you think about saving your life, that will give you more motivation.

When I first started, I knew Formosa and our Parish council members were in a tug of war, so we formed the coalition. They told me, ‘Sharon, this might take three years.’ I became depressed, I say ‘well it may take three years, so we got to work harder and try to get it done.’ Those little speckles of depression went away when you want something, you have to work for it. It's not going to fall out of the sky, you must keep the faith.

But you know, I've seen a little red bird. I don't see as many like I used to see, but I've seen a red bird, and a red bird means change and love. Both signs, love and change — change for the better.

What can we do to help?

Help us try and get the word out; broadcast it if you can. Tell it to people that might be familiar with our Governor. Reach out to Bishop Michael Duca [Diocese of Baton Rouge, Louisiana], he is friends with the Governor, he might be able to convince him. Put it out nationally if you can, put it out all over Louisiana. Let them know you are fighting with us. 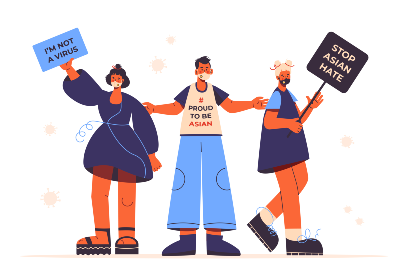 U.S. Federation Stands Against the Racism and Misogyny Directed Towards the Asian-American and Pacific Island Communities